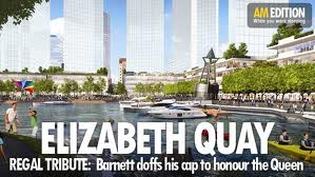 Elizabeth Quay has a budget of about $2.6 billion dollars! This government project is set to have the city Perth not thought as the isolated city in the most isolated country in the world but as a cosmopolitan city the Elizabeth quay will help demonstrate the change in Perth this will return the city's main focus to the Swan River and enlarge the city of Perth’s reputation as one pf the most habitable and  cosmopolitan cities in the world. The Elizabeth quay is about 10 hectares it will be situated between Barrack and William streets the Elizabeth quay  will feature a stunning 2.7 hectare inlet surrounded by a split level promenade there
will have new public spaces, shops, cafes, restaurants and entertainment venues.

Completed facilities will include 1,700 residential apartments,
150,000 square metres of office space and 39,000 square meters of retail space. the
construction of the inlet is thought to take about 30 months to finish.
Construction of the associated buildings has been estimated at taking between 10 and 12 years to complete, with the Metropolitan Redevelopment Authority's marketing and sales being undertaken between 2014 and 2022.