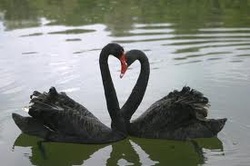 Black Swans are found throughout Australia except of Cape York
Peninsula the black swan is known for being the reason the swan river in Perth
is called so. Black Swans are mostly found in salt waters but they also are
found in fresh waterways or permanent wetlands. For the black swan to take off
into the air they would need about 40 m or more of clear water. Outside the
breeding season Black Swans can travel large distance the black swan  fly at night and rest the day away with
the other swans.

Black Swans are vegetarians their Food is made up of weeds and
algae.  One of the reasons why the
black swan has such a long and graceful neck is because to get the weeds and
algae that lucks under water. The black swan plunges its long neck into water to
obtain the food that they depend on. The black swan’s neck can go up to 1 m
deep.  Sometimes the black swan
grazes on land and if you ever see one of these birds on land you will see how
much of a clumsy walker they are.

Black Swans form pairs or small colonies in shallow wetlands.
They pair for life, with both adults raising one brood per season. The black
swans eggs are laid in nests made out of reeds and grasses or anything else they
can find in their surroundings. The nest is placed either on a small island or
floated in deeper water. The offspring’s are covered in grey and can swim and
feed themselves as soon as they hatch. The breeding season is February to May in
the north (Western Australia) and June to September in the south (Queensland)
the clutch size can be up to 10 but no more.