Aborigines in the Swan River 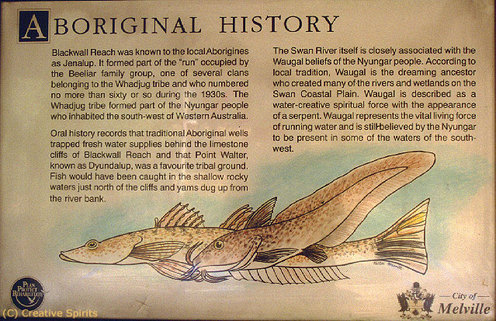 Before Captain James Stirling and the free settlers came and built that Swan
River Colony, the land belonged to the Noongar tribe. They were an Indigenous
group of people who lived in the south-west corner of Western Australia, from
the west coast of Geraldton to Esperance on the south coast. Traditionally, they
inhabited the region from
Jurien Bay to the southern coast of Western
Australia, and
In their language “Point Walter” means “place of
long white flowing
hair”, which describes the sand bar and the white waves
breaking on it. Men used
the sand bar to cross the river when they met the
women.

The rivers of Perth are featured in many Dreaming stories of the  local
Aboriginal people the name for the aboriginal group that roamed
around the  swan river is the Nyoonger. For the nyoonger the Swan River is
not  called the  swan river they call it the Derbarl Yerrigan. “Derbarl  Yerrigan describes the
Swan River did you know that the Derbarl Yerrigan is the place of fresh water
turtles the fresh water turtle was very  important  to the nyoonger for  medicine.

At a time when the ancestors still roamed through the land, a groupof
Aboriginals camped at Point Walter. To this group belonged a man and a woman who
were in love. They were so much in love that it bothered the others. Finally the
elders found out that something was wrong. The men and women gathered and found
out that their love was forbidden by the law because their groups were too
closely related.

So the severest punishment was decided for them: exclusion from the group. It
would make it very hard for them to be integrated in any group ever again as
everybody would know that they’d seriously broken the law.

But it still wasn’t severe enough for the women. They demanded the couple’s
death. This was accepted and the group sang the two lovers for spirits to come
and torment them. The two couldn’t stand this and committed suicide, right on
the spot where we were sitting.
But their love was still strong. The tree next to the path was the man, the
one behind the woman. And the branches of these two trees touched each other as
if the couple kissed. That is why these two trees are called “Kissing
Trees”.
Quotes from http: //www.creativespirits.info/australia/western-australia/perth/swan-river